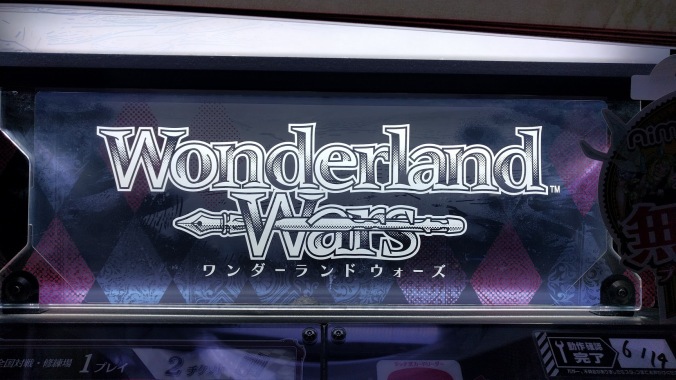 As mentioned previously, Wonderland Wars, is one of the hottest games in game centers all across Japan. I’ve been asked more than once while playing just how to play and how the game works, as navigating Japanese menus can be time-consuming or bothersome for those who are unfamiliar with the language. In actuality it’s very easy to get started and anyone who has played a MOBA before will be able to grasp the gameplay very quickly. The game offers a robust tutorial for first time players that can take upwards of 30 minutes to complete, its free of charge too, so for those that are interested they should go ahead and try it. 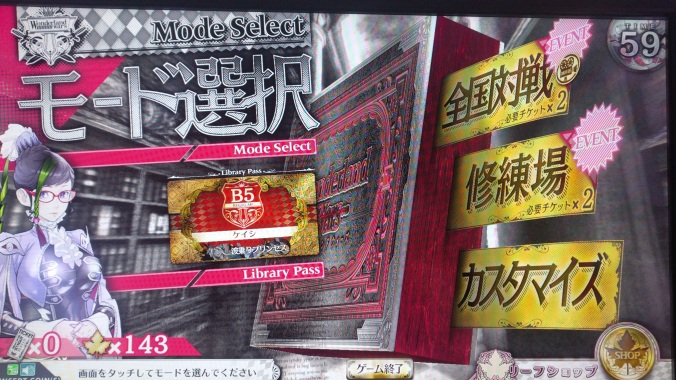 The menu shows various information such as your tickets remaining and the amount of in game currency you currently have on the bottom left. It takes 2 tickets to start a game, and you can buy 8 Tickets for 500 yen, so it works out to about 125 yen per play, and given that a typical game will run about 8 minutes, it’s a pretty solid deal. On the right hand side, you have the main multiplayer option at the top. This mode will match 4 people on 4 people, it does a fairly good job of balancing the skill levels so even if you’re a complete novice at the game, you wont get totally blown out. The middle option is the story mode, there are some neat fights in this mode that the standard multiplayer mode does not have, so those looking for something a little different from the standard 4v4 battle can look here. the last option is this customize menu. Here you can outfit your characters with the various cards that you collect through playing. 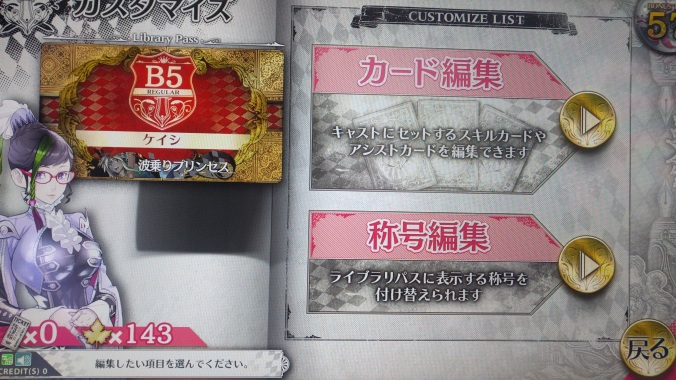 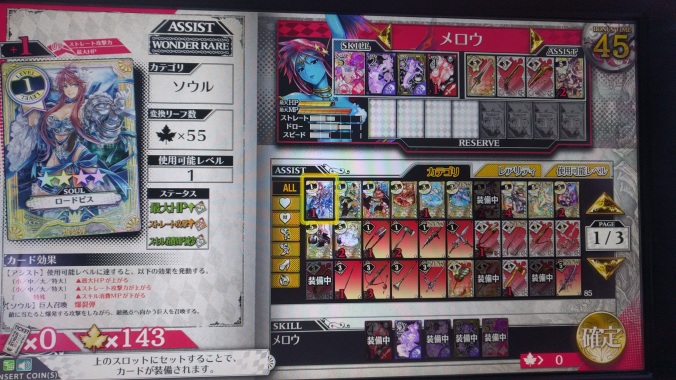 In the card screen, your presented with a large amount of the cards you have collected and the skill cards that the chosen character can use. Here we have the character Merou, like all characters she can have 4 Active skills, 3 Passive Assists and 1 Soul card. Not getting into too much detail, but the assist cards you choose will drastically change the way your chosen character plays, as they can boost and lower your Basic Attack power, your Drawing distance, and the overall speed of your character. There’s pretty much an endless amount of customization you can use and a lot of fun is had in finding the right build for your set up. With skills each character has 4 slots, and 5 over all skills, so it’s up to the player to choose which to use and which not too. These skills can also be leveled up by collecting more cards via playing.

The standard multiplayer takes the form of a 4 vs 4 battle. Usually you will be matched up with 4 players of fairly even skill levels, though on occasion you may be matched up with an AI if not enough players are found across Japan, this is more likely to happen midday during the workweek, as the game centers in general are much less crowded. 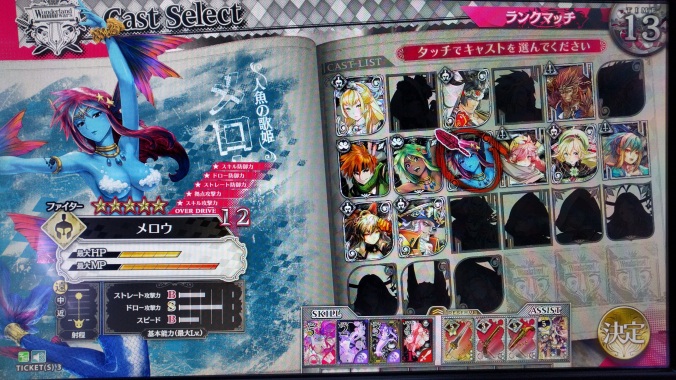 The very first thing to do however is to choose a character, you have to go about unlocking them through Events or by earning the in-game currency “Spell Leafs.” There are 21 currently with several being variations on each other, usually a “Dark” form of some kind. The shown character was mentioned earlier Merou, mine currently is Level 12 as shown above, through playing with a character and earning general experience points their various stats will increase, the amounts aren’t major. So even if you have a Level 6 Character, they are still more than useable, and usually when matched up with other players, the characters will all be close in level. To look closely at a characters stats, the HP and MP meters should be pretty self-explanatory for anyone familiar with video games. The other stats can be a little more complicated though. The first stat is the strength of their basic attack. The second is their drawing attack, which we will cover shortly, and the final stat is the characters move speed. The cast themselves have base stats which get enhanced their the chosen assist cards, so while some players may prefer to have a powerful Drawing attack, others may prioritize speed. The different combos really ensure that no two heroes are alike, even if they may have similar attacks. 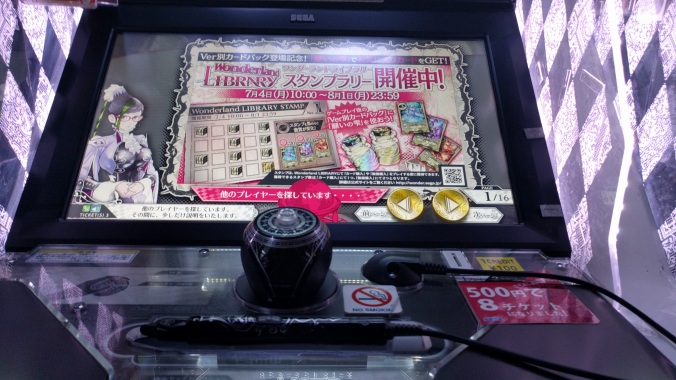 Wonderland Wars has a really fun control style, one hand controls the joystick, and one controls the stylus. The joystick has an evasive button which allows for quick dodging and the stylus has a button which changes the attack type from the basic straight attack to the drawing attack. Learning when to use each type of attack as your disposal is critical to having success in player vs player matches. While the controls are simple in nature, often times drawing and being precise while moving and attacking at moving target is much harder than it would seem. Though the satisfaction of landing a direct hit is every bit as pleasing as landing a skill shot in a game like DotA 2 or LoL.

The most important part of any game however, should be the Gameplay. In Wonderland Wars, two teams of 4 face off on a 3 lane map with fog of war ladled jungle areas between the lanes that are ripe for ganking. From my experience, the best team setups include 3 Laning heroes who are good at long range attacks, with a support or a ganking hero roaming. Though on occasion there are several different set ups I have seen from the team pairings. 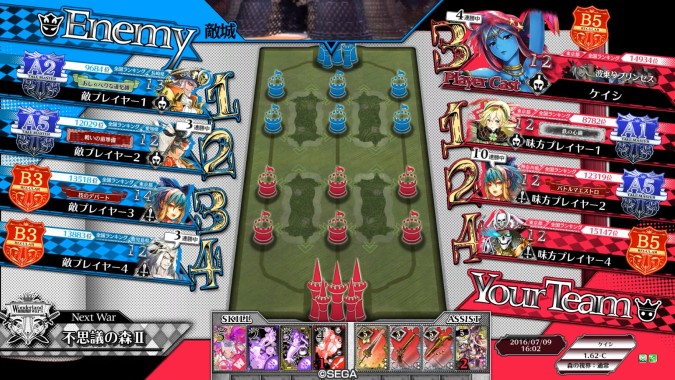 The pregame screen shows various information, such as your teams cast members, the opposing team, you can also view their skill and assist loadout to determine which match-ups are favorable to you and which are not. 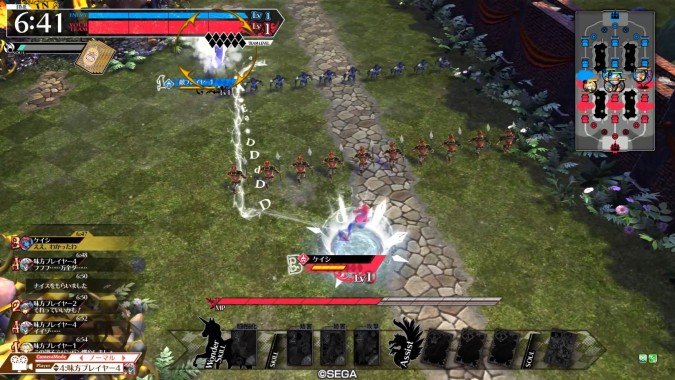 For the ingame hud, it’s fairly simple, the mini map in the top right shows your teammates, yourself, and your creeps, as well as enemy heroes that are visible to your team. The map is interactable with the stylus so you can call out various things to your opponents such as missing heroes, if you need help, or if you think the team should push an area hard. It does a pretty good job to make up for the lack of communication that playing in a game center brings. It also shows your available skills, the time remaining and your teams health bar and exp bar.

For attacking you use the main stylus and you draw the path you want your attack to take, it’s a lot harder than it seems as to hit your enemy you need to get really good at deception and prediction. Aside from that, mind games are a really big part of the initial laning phase in Wonderland, as if your opponent is too aggressive or on reverse if you are too agressive and ignore the creeps too much you can quickly find your tower destroyed and the enemy team up some precious exp. 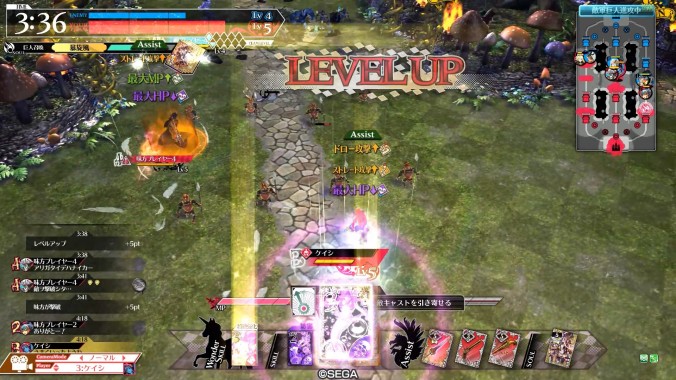 As you level up, you gain access to the skill cards that you set in your customization menu before the game. These skills can be anything from attack skills, to healing or buffing skills, as well as the characters Ultimate ability which can be used to get out a pinch, but only once per game. Leveling up also gives access to your assist cards, here in the above picture our team hit level 5 which activated two of my support cards and increased my attack power at the cost of my max HP lowering. Controlling the exp game is one of the critical elements, and even if you take a bunch of early towers, if you do it haphazardly you may find yourself in a tight spot in the late game. 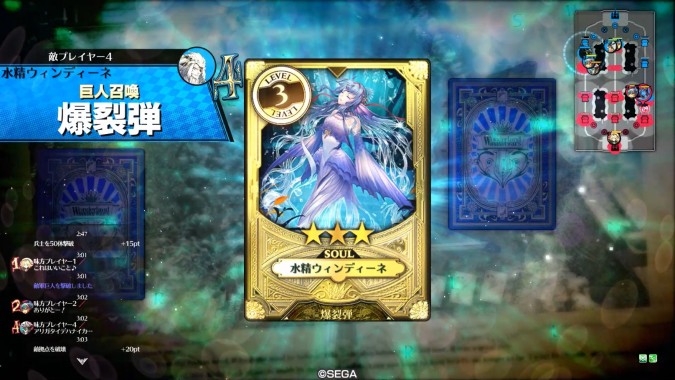 When either team suffers enough damage, a soul will appear randomly chosen from the equipped souls of the team. These souls will march down a lane either doing massive damage or giving the surrounding heroes a hefty buff, failing to eliminate a soul can cause serous issues and may even cost a team a game, so they should always be a priority to focus down.

Each team has a health bar, that is depleted  through killing enemy heroes and downing their towers, at the end of time, or if another team manages to totally deplete the other teams hp bar. The team with the higher bar remaining wins. 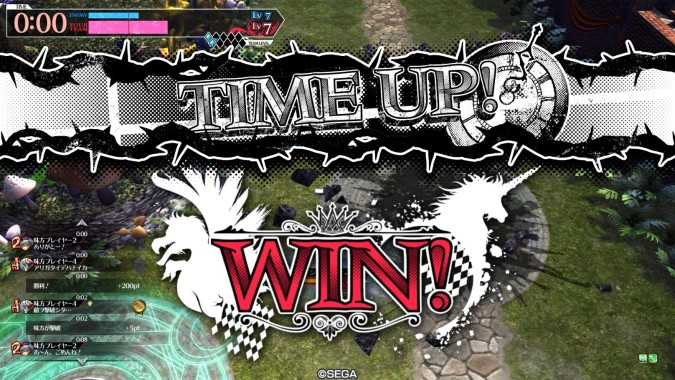 Following either a win or a loss, you go to the results screen where you are graded on your performance and earn exp towards the next level on your library pass which unlocks various items such as ingame currency, item drops, and sometimes characters or the ability to carry more cards. 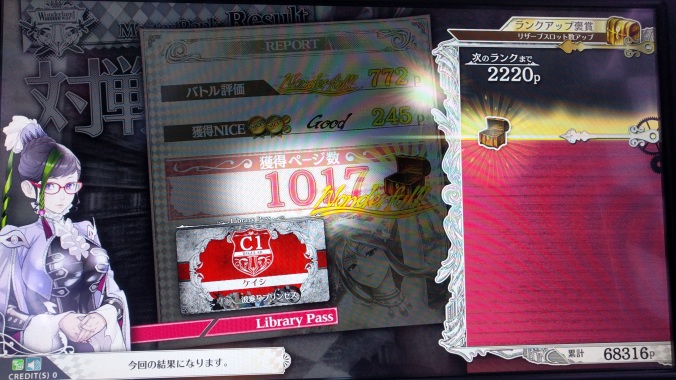 This game is really a lot of fun and offers deep gameplay and accessibility, I wish it was possibly to bring overseas, but the smaller player base may make bringing an arcade MOBA over a difficult task. And the lag issues that would come from pitting people in Japan against those in the U.S. or Europe a tough hurdle to overcome. If anyone visits Japan though and is a fan of the MOBA genre, they should be sure to try this game out, its an excellent way to spend a night in a game center.

Please check out the video below for a full match and feel free to comment or send any questions my way, I’ll be happy to answer them.