To start, I think it would be best to cover what is one of the most popular arcades in the mecca of Video Game and Otaku culture, Akihabara.

Club Sega is one of four arcades owned by Sega in Akihabara alone, the others being Sega Gigo and another just labeled Sega about a 30 second walk south, and one near the station entrance.

For those who aren’t all too familiar with Japan’s Game Centers, they can be overwhelming, often packed full on weekends, and sometimes even the smell of cigarettes can be overwhelming. But, finding the right game to play at the right places can make or break your experience in a Game Center. Every location draws out a different type of player and a different fan base.

Club Sega in Akihabara is 6 floors of arcade heaven, each with their own variety of the latest in Japanese gaming. The first three floors of which are mostly devoted to the Japanese Crane game. Which are decidedly more skill based than their American counterpart, as with the right touch and a little luck as well its possible to win some very neat prizes. Floor 1 and 2 is dominated by prizes for Love Live! School Idol Project and Kantai Collection, both properties which are tremendously popular in Akihabara, bring droves of fans to try to win some prizes. Floor 3 caters to Shounen properties along the lines of Dragon Ball and One Piece, fans of those series can still find a prize or two waiting for them if they want to test their skill.

Things begin to open up a touch more while climbing up the floors here, or depending on how you look at it, this is where 100 Yen coins come to die. Floor 4 is home to what is easily the most popular game at this location, Kantai Collection. Kantai Collection is an arcade port of a Japanese Browser game that became largely popular just a few years ago, in where you collect and assemble a fleet of “Ship-Girls” and send them out on various missions or exploration. There’s a strong collectable aspect to this game, in that when you either construct or discover a new ship on a mission, the arcade machine gives you a physical card which you then can use in your fleet on future missions. Though a full game report will hopefully come at a later date, the lines have been incredibly long.

Floor 4 of Club Sega is home to other games as well, the second most popular being Wonderland Wars. Perhaps the first arcade based MOBA to catch on, Wonderland Wars in a PVP based game in the same vein as DotA 2 or League of Legends. In Wonderland Wars teams of 4 face off against each other to try to push each others towers down, while also trying to defeat each-other to ultimately come out on top victorious. The game mechanics we will cover at a later date, but one thing to note is the innovative control system which really makes the game shine. 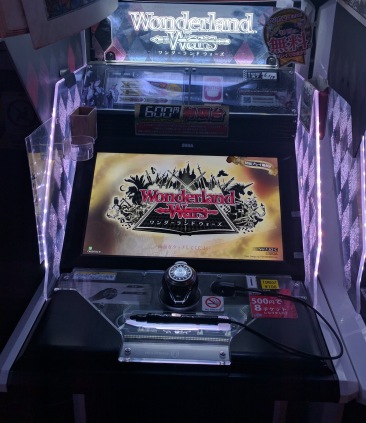 Players control all the action using a joystick to move their chosen character and perform various evasive moves, and the stylus which is used for attacking and interacting with the skills they have chosen for their own character, expect a detailed write up in the very near future about how this all works, but it’s an easy task to sink a couple hours into this game as the accessibility and match length is comparable to Overwatch leaving for shorter fast paced matches that really click together in the arcade format.

The fourth floor is home to other games as well, the latest Gundam U.C Build Fighters calls its home here, as does Dissidia Final Fantasy which is an arcade version of the fighting game series for the PSP some time ago. Theres several standard fighting games such as Tekken 7 and Nesica X Live, but Club Sega in Akihabara does definitely not make a home of fighting games. Rounding out the 4th floor is World Club Championship Football, a simulation type game where you train a Football Club against other players and try to win a championship, and the latest Sengoku Taisen game.

Floor 5 caters to fans of a more hands on variety as two games in particular take up the majority of the space. Gunslinger Stratos 3 and Wangan Midnight Maximum Tune 5 DX are the go to games here. Gunslinger Stratos being a fairly complex arena fighting game where you control your character using a set of two light guns with controls and the ability to link them together to form one larger gun via magnets. While Wangan consists of high speed Japanese Street Racing on representations of actual highways though out the Tokyo and Osaka region. The 8 Machines here are often a hot spot for the region and this floor may very well be the racing game capital of Tokyo. Also in the racing category is Initial D Arcade Stage 8, the 8th entry in the long running Initial D franchise, this game lets you live out life as a Japanese Drift Racer and race along the actual courses from various spots in Japan and from the Anime/Manga series.

The top floor, is home to all of the rhythm games you could ever hope to want to play, represented are Project Diva, Museca, Crossbeats Rev. Sunshine, MaiMai Pink Plus, Sound Voltex 3, Various Beat Mania versions, and Chunithm Plus which does away with buttons and instead is played on a touch sensitive bar. Chunithm’s popularity is incredibly high right now, and the machines are often full up with a queue waiting for a chance to play.

Club Sega Akihabara is what some call a haven of games, nearly every major game is represented here, with some exceptions, Gundam Ex Vs Maxi Boost On is not represented here and is still one of the most played and fiercely competitive games in all of Japan. Sega though has really spread the genres out really well though with the amount of locations that they hold in Akiba, as Gundam can be found heavily in their other locations, as well as Fighting Games in general, if you looking to get into that scene and challenge some of the best Japan has to offer this is not the arcade for you. But what sets Club Sega above some of its competitors is this location has no smoking at the machines themselves, only in designated areas, so its possible to game and not inhale a couple packs of cigarettes second hand.

Although, the centers vending options leave much to be desired, as most of the drinks are standard fare for Japan and the lone vending not serving drinks is an ice cream vending machine. 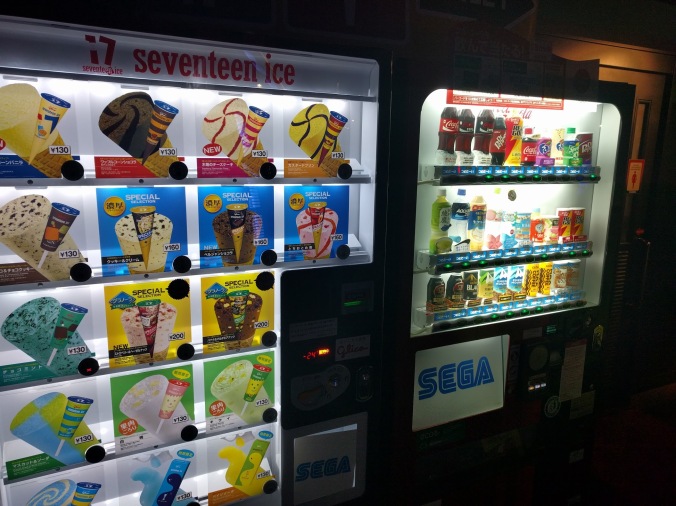