Today marked what I think is the final location test for Initial D Zero before it releases in March. I had missed the August one, and I was certainly not going to miss this one. I arrived early to the arcade where it was being held. The Sega nearest the Akihabara station exit. There was a decent sized line for being midday, but I guess a lot of Tokyo’s residents don’t really have much to do.

First things first some impressions on DZero and how it has changed from its predecessor D8.

Absolutely the most prominent change is the addition of a full gated shifter, It was actually much higher in quality than I thought and expected something along the lines of what Wangan uses, but this felt much more like an actual car’s transmission. Its easy to select gears and it opens up a whole new method of technique by being able to straight shift from 6th to 2nd instead of having to progress downward sequentially.  If you make a mistake while shifting the “neutral” position switches the car to Automatic until you fix your gear shift so you shouldn’t have any races ruined via a shifting mistake either. 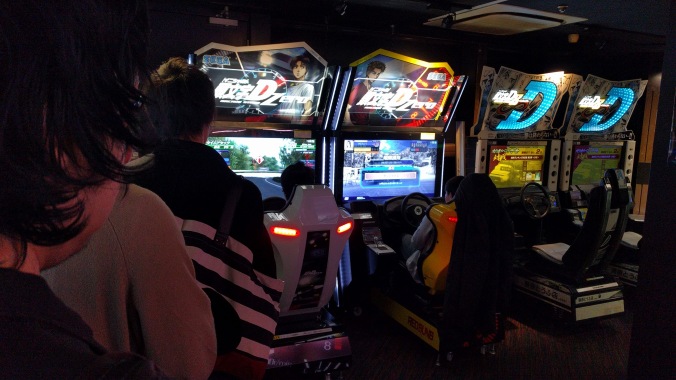 The cabinet itself is also much sharper since its the first time the cabinet has been upgraded since Initial D 4 back in 2007. The speakers are better, the seats are nicer and the screen is 100x better than D8 which can be seen next to Zero in the above image for comparison. My only complaint would be that the wheel felt just a touch too small, but that can probably feel normal after playing for a bit.

The game also runs a good deal smoother and sharper, I believe the general engine is roughly the same as D8, but the framerate is boosted and the resolution got a serious bump up, My guess would be from 720p to 1080p

The small but noticeable changes to the screen really do bring out the detail in the courses though as well as increase the sense of speed while racing.

Gameplay wise, its hard to judge the game with a Spec 0 car, but even from Spec 0 you can tell the entire physics are overhauled, it seemed like Sega wanted to take away a lot of janky techniques are are so commonplace in D8 and trying the execute them would pretty much torpedo your race as observed even with people with higher spec cars (they upgrade pretty quickly, though this could just be for the test). The cars in general can really drift around corners without much effort and it felt much more like Initial D than the prior entries to the series.

Also the speed range has been dramatically shifted on a lot of courses. Hakone for example runs a great deal faster than it had in D8 while Akina runs a great deal slower, owing for more along the lines of the anime than the games.

The only downside to the entirety of DZero is the elimination of Eurobeat to some generic trash, I wasn’t the only person who felt this as some would opt to turn off the BGM completely, maybe Sega will realize what their fan-base enjoys and go back to some Eurobeat? Though I suspect this may be more inline with what the Studio behind the D movies wishes and not so much on Sega’s end.

Overall, DZero is a dramatic upgrade from the previous iterations, I really hope it comes to the U.S. sometime, but I’m really not holding my breath. As the addition of the gated shifter and overall enhancements to gameplay and making the entry barrier a lot easier to cross. The Aime card addition is nice as well as it’s one less card to carry around. I am glad they kept the driver portraits and the character customization as well.