Being one of the most popular titles in the Japanese otaku world currently, its no surprise that the arcade game usually sports impossibly long lines. Deciding that it was finally time to give this game ago, I visited a game center in Akihabara where each machine is limited to one play only. It happened to be a rather slow Thursday night so I was able to play without too long of a wait.

To go into more detail, for 3 credits you get 900 GP, which acts as a overall timer as well as a currency. Just about everything you want to do takes from your GP, including spending time in the menu systems, which could be a bit daunting at first. The in-game tutorial for first timers does explain the basics fairly well even for non Japanese speakers and with a small amount of poking around, they become fairly simple to navigate. Though anyone who has experience with the Japanese Web Game will feel right at home. GP is also used for sending your fleet out on sorties in attempts to get items to help your fleet as well as completing missions for EXP and the chance at a card drop from the mission it self. A typical 900 GP play usually lasts for about 30 minutes  depending on your mission selection.

First things first however, lets talk about the games control system, as seen above there’s very few actual controls, though they work perfectly well for the game play. The game features a full touch screen, as well as a naval themed controls in the wheel and the throttle and one button which is used to fire your selected weapon group. 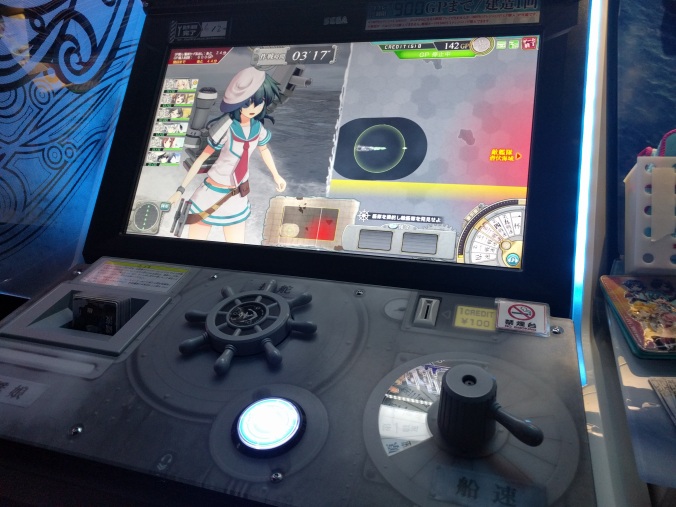 All of which are fairly straight forward to use to control your fleet. There was a nice gimmick to controlling your fleet on screen with these types of controls, and the responsiveness is what you what expect from controlling a ship. Though it does take some delicate control to evade enemy attacks and set your own up.

The real fun though is in building and collecting your fleet, Each time you complete a mission you have the option of paying an extra 100 yen to have the game print you off an IC card of a ship that can drop from that mission on the spot. You can also construct ships as well, back at base using your resources that you collect on missions. The ships you have collected can be put in the ship slot on the cabinet and will show up available for use in your fleet. 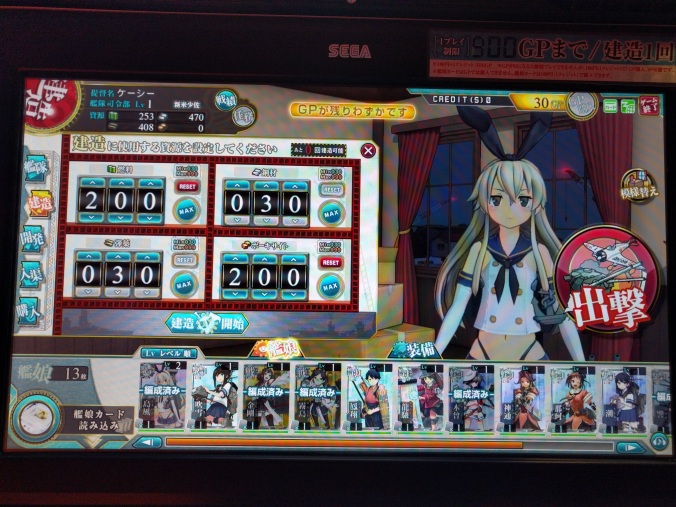 The Construction Menu for ships.

The construction menu allows to spend various resources to try to get ships, there’s also a chance to get a rare holographic ship card, some of which can sell in second hand shops for upwards of 10,000 Yen, with the most expensive that I have seen at 64,000 yen or about 600 USD at the time of writing. There’s plenty of different ship classes all with different stats and weapon armaments from Destroyers to Battleships. How the player sets up their fleet is what allows for the completion of harder and harder missions as sometimes you need the speedy yet weak Destroyers or the monstrous Aircraft Carriers to best complete your mission.

When you have your fleet set up and are ready to send them out on a sortie, you are taken to the mission select screen, there is a really good amount of missions to go through. Each progressing in difficulty and each with varying ideal setups for your fleet. Once you select the mission you undertake, the battle/exploration segment starts. 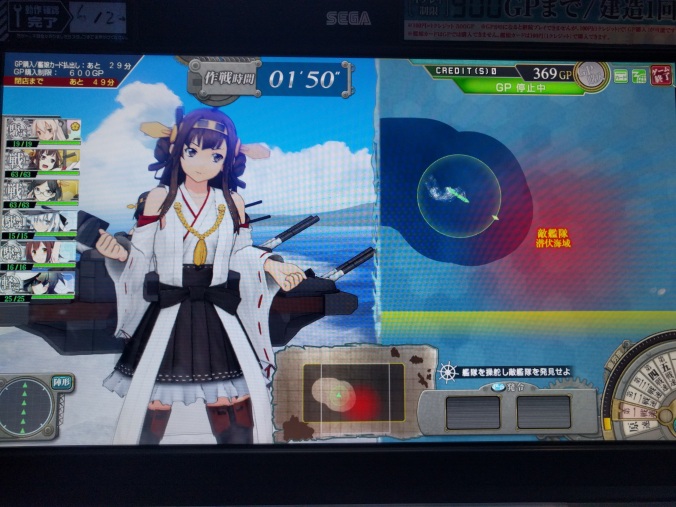 Each Mission has an overall time that you are allowed to complete it in to get the full rewards, your ships various speed stats effect how well they can traverse the sea to either hunt down the enemy ships or resources. In the above image, we only have a vague idea of where the enemy is and are en route to their believed location. If your have your ships outfitted with scout planes you can send them ahead to reveal large amounts of area where there may be items to aid your fleet, or of course the enemy you need to obliterate.

Once found, the true battle starts and you begin to close in on their location, the various ship classes have different firing ranges, and once in range a target will appear around an enemy and start off big but rapidly get smaller. It turns into a timing game of sorts as the perfect shot carries the most damage, but if your timing is just even a bit off you will wind up completely missing your mark. On the contrary a safe shot will almost always hit but carry little weight behind it. While your setting your shots up however, the enemy is doing the same. You can swap between the main cannons, short range rapid fire guns as well as Torpedoes and available aircraft. Torpedoes of note are hard to set up but can deal extremely large amounts of damage and really helps the small destroyers dish out the hurt.

A couple of times I almost got caught with tunnel vision as my fleet was about to run straight into an enemy bombardment, and from what I have seen of the later missions, it takes some serious control to pull off the right shot without getting obliterated yourself. But if you play it too safe, eventually time will run out leaving you with a bad review and little experience from the battle. The ship the performed the best is crowned MVP and gets a large experience boost. Its easy to tell which one it was since they will be the one featured on the screen like Shimakaze below.

After the battle is over your taken to the results screen which is pretty standard, every ship that participated is rewarded experience which levels them up and increases their over all stats. Your “Character” the admiral also gains experience points which allows for more resources to be stored and such. You will also be given the chance to draw a card for 100 yen, the first few missions it will probably be best to draw the cards to round your fleet out unless you happen to buy some in a secondhand shop or grab then through gacha’s like I did. And the later missions that have a chance to drop specific rare cards it could very well be critical to draw and hope for good luck.

After the battle your taken back to the main menu where you can continue to go on sorties or try to construct or repair your ships. Its also important to resupply them as well if you plan on undertaking more sorties.

One important thing that seems to be of key success to upgrading your fleet is to construct new weapons to replace the default weapons on your ships. It’s done in the same way as constructing a ship, and can lead to some major upgrades, as there’s the potential for rare and powerful guns, utility items and aircraft.

There is a crazy amount of depth to this arcade game, with a boatload of ships to collect, weapons to craft and missions to undertake. Playing for an hour felt like I barely scratched the surface and I plan to play again in the near future and try to add to my collection. I can see why the game has a constant hour plus wait to play. If you happen to have the chance to play, its absolutely worth checking out regardless of whether you are a fan of KanColle before playing.